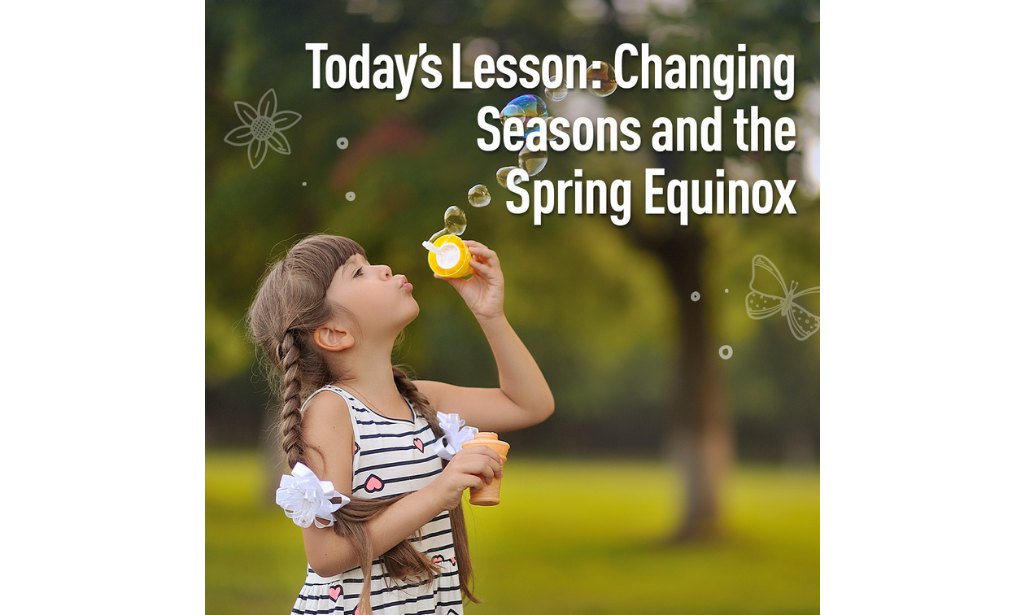 You’ve probably felt it in the air lately–the temperature gradually rising (well, in some areas), more frequent rain, perhaps even some buds, the lovely aroma (or stench, depending on your perspective) of fresh mulch being laid in neighborhood flowerbeds. Yes, spring is just about here, which means bunnies, baseball, bees, barbecues, and blooms are right around the corner!

On Sunday, March 20, 2022 (at 11:33 am EDT, precisely), spring will have officially arrived for those who reside in the Northern Hemisphere. The first day of spring is also known as the vernal equinox…but what exactly does that mean? In this Today’s Lesson Is… you’ll learn all about equinoxes, solstices, and season!

As we mentioned, it’s the first day of spring…but what does that mean, exactly? The word vernal is Latin for “new” or “fresh” (the Latin word for spring is “ver”…the more you know!), and equinox is derived from the Latin aequus (equal) and nox (night). Equal night. But what does that mean?

According to the trusty Farmers’ Almanac, our daylight hours (or the period of time between each sunrise and sunset) have been getting just a little bit longer each day since the winter solstice (more about that shortly) on December 21, which is the shortest day of the year when it comes to daylight.

But even as the days gradually grow a bit longer after December 21, you’ve probably noticed that there is still more darkness than light each day between December 21 and March 20. That all changes on the vernal equinox, which is the first day of the year that offers the same amount of daylight and darkness.

As the Farmers’ Almanac explains, “at this moment, the direct rays of the sun are shining down on the equator, producing the effect of equal day and night (give or take a few minutes). After the vernal equinox, the direct rays of the sun migrate north of the equator (with hours of daylight steadily growing longer) until they finally arrive at the Tropic of Cancer (latitude 23.5 degrees north).”

At that point, the migration of the sun’s rays comes to a stop, and the Tropic of Cancer is as far north as they’ll go. Which brings us to…

How’d you guess? Solstice is the event that occurs when the sun reaches its most northerly (summer) or southerly (winter) excursion relative to the equator. The summer solstice, which generally occurs on or near June 21, therefore is the longest day of the year in terms of daylight hours. You know, when you try to go to bed early, around 9:00 pm, and you can’t fall asleep because the sun is still out…

So, what happens next? After the summer solstice, when the sun’s direct rays are as far north as they’ll get, the rays start to head south, which means the days become a little bit shorter. But before darkness overtakes light, there must be a balance of daylight and dark–that takes three months and is called…

As summer’s three months go by and daylight gradually fades, we reach September 22–at 9:03 pm EDT, we will have reached the autumnal equinox–or the first official day of fall. And if you remember the definition of equinox (equal night), you’ll know that daylight and darkness are once again in perfect (or pretty close to it) balance!

You got it…the winter solstice! When the sun’s direct rays reach the Tropic of Capricorn, we experience our shortest period of daylight and longest day of darkness of the year in the Northern Hemisphere. During the winter solstice, the sun appears at its lowest point in the sky and remains there until it gradually increases its point once the winter solstice passes and the days once again grow longer.

That happens when the sun’s direct rays start moving back north again toward the equator, eventually resulting in equal daylight and darkness three months later on the…vernal equinox! Yes, we just went through an entire year’s worth of seasons in the Northern Hemisphere, and the cycle keeps repeating itself year after year.

What about the Southern Hemisphere?

Well, it’s the opposite of everything you just read. Why? Because, for example, when the Northern Hemisphere’s part of the globe is tilted toward the sun (summer solstice), the Southern Hemisphere’s globe is tilted away from the sun (winter solstice). So, when the North is experiencing its longest day of the year, the South is roaming around in darkness (not literally) during its shortest day of the year.

The website HowStuffWorks.com has tons of cool science projects and experiments kids can try out. We’ve included one that relates directly to this lesson: Sunrise, Sunset–a project that teaches how daylight changes with the seasons!

All you need is some paper and a pen or pencil.

What did you notice? What moved? Hint: it wasn’t the sun! It’s the Earth, and as it orbits the sun, its tilt toward the sun changes, resulting in the sun rising and setting in different places on the horizon. This experiment illustrates not only how the Earth tilts as it orbits the sun (and creates seasons) but also how the sun’s rays move during each season, causing changes in the periods of daylight and darkness we see all year long.

We hope you enjoyed Today’s Lesson! Subscribe to our blog for more fun lesson ideas and creative homeschooling tips and tricks! 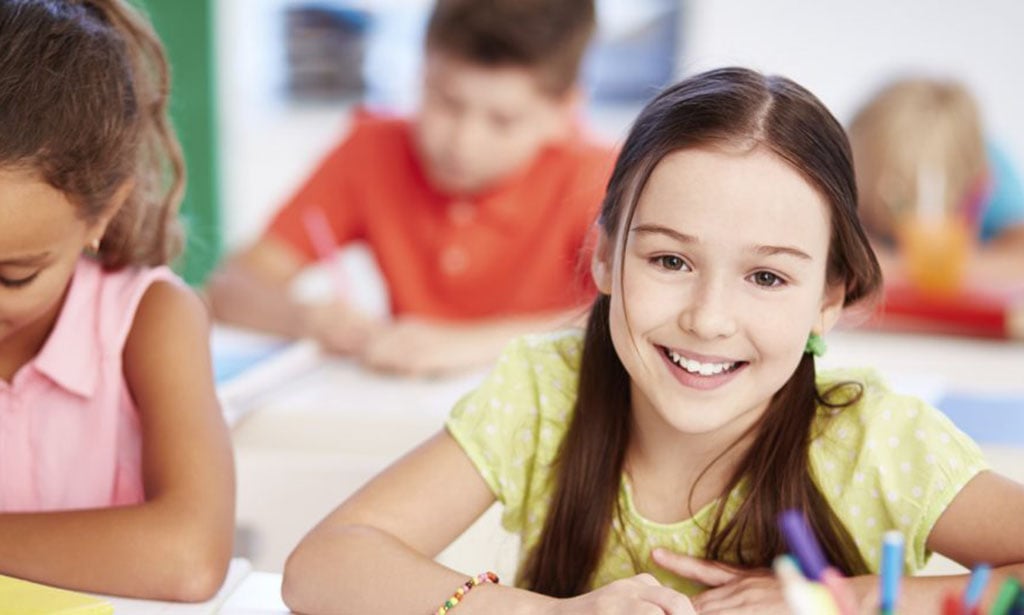 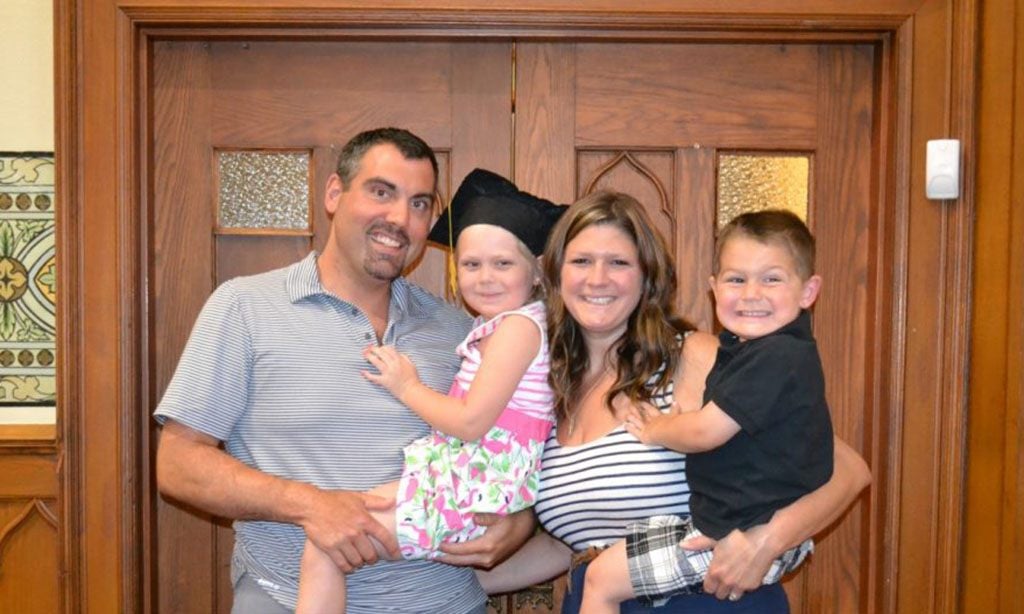